On our way to the adoption center my stomach was all butterflies. I was prepared for the worst: kicking, screaming, sobbing uncontrollably–you name it. We and another family were led to the area where we would receive our sons for the first time. The building had just opened–promptly at 2pm–and our guide told us the boys were still on their way. The way he said it made it sound like we had time for a potty break and prepare for the big moment. As one member of our party left for the restroom, less than a minute later the boys walk in with their nannies! I had read about this before with other adoptive families being caught off guard and not given any warning of their child’s arrival, and sure enough, this was happening to us!

There was little Leo. He looked a lot smaller than I imagined, but had the same gentle demeanor and cute furrowed brow I had seen from the photos we were sent. The lady holding him, it turns out, wasn’t Leo’s nanny, but a staff worker at the orphanage (tomorrow we will get to visit the orphanage and meet Leo’s nanny). Leo clung on to her tightly, even after a few prompts from her to go to us. As soon as Phillip and I pulled out snacks, Leo started to warm up to us. He eventually came to me and took the lollipop I was offering to him. The caregiver slipped away to the far side of the room to give us some space. Leo didn’t cry at all, but was still very quiet. He soon started reaching for the caregivers as I was holding him, so I got up and we tried to distract him by walking in the opposite direction and playfully engaging with him. 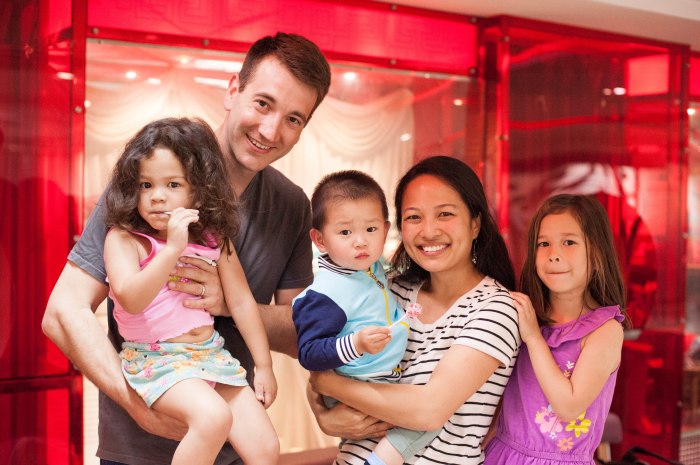 He sat on my lap during the van ride back to the hotel, not saying a word. As soon as we went up to our hotel room, we blew up several balloons for the kids to play with. Leo lit up! He was all smiles and laughter as he hit the balloons around with his sisters and watched Phillip being a goofball in the middle of it all.

After playing hard with the balloons, we decided to take a rest. Leo was used to having an afternoon nap, so we figured we’d try to put him down for one, even though it was late. The moment Laura left through the door, though, (she had been taking pictures the whole time, but not directly interacting with Leo), Leo started reaching for the door and saying something that actually sounded a lot like “door.” I later realized that any time the door to our room opened, it snapped Leo back to the reality of where he was, which was away from his nanny and away from the orphanage. Leo started to cry big tears, longing to be back to what was familiar. Crying is a good thing, I’ve learned, because it means he was really attached to his nanny–and therefore has the ability to attach to us. Even though it was sad to see him cry, I was glad to know he was grieving normally, considering his sudden great loss.

We handed the girls off to Laura while Phillip and I had some bonding time with Leo. We thought it would be a brilliant idea to bathe him, but as soon as we started to take off his shoes and socks, he started screaming bloody murder! Instead of a bath, we allowed him to explore his surroundings in the confined hotel room. Over the course of a couple of hours he motioned toward the door less and less, and became more and more comfortable with us. He even peed in the potty when we took him to the bathroom! When the girls returned to the room, they played together with Leo some more, and there were more smiles. At one point Jasmine said, “I like Leo.” And Juliette said, “I like Leo, too. He’s so cute!”

When it was closer to bedtime, we pulled out the family picture book we had sent Leo in a care package. I started going through each page with him, saying each family member’s name (“Mama,” “Daddy,” “Ate” [pronounced ‘Ah-teh’] for eldest sister, and “Dete,” [pronounced ‘Deh-teh’] for second-eldest sister), and prompting him to repeat after me. He finally started talking and mimicked each word perfectly, even matching my inflection. I couldn’t believe it!

After eating a late (9pm) dinner, it was time to put the kids to bed. The girls went to sleep immediately (a little before 10pm) while Leo stayed up just a little, still exploring his surroundings. We went through the family picture book again, and this time I pointed to each sleeping girl. Then the sweetest thing happened. Leo repeated “Ate,” and pointed to Jasmine, then caressed the side of her face. We walked to the other side of the bed and he did the same thing with Juliette, saying “Dete,” and stroking the side of her face. I couldn’t believe how early he was already making the connections!

Finally it was time to put Leo to bed. I was a little nervous because I didn’t know what to expect. Would he start crying again because the dark was scary? Would he be confused because he wasn’t sleeping in his crib? Would he run to the door, wanting to be with his nanny? Phillip and I decided to just bring him into bed with us and see what happened.

I held him as I sat in bed, and rocked him back and forth. Surprisingly he didn’t resist me! We started singing a lullaby to him, and in less than a minute this tired boy went limp in my arms. I slid down further in bed and let him lie on my chest to sleep the rest of the night.

Thankful God brought this boy into our lives and made us his forever family! 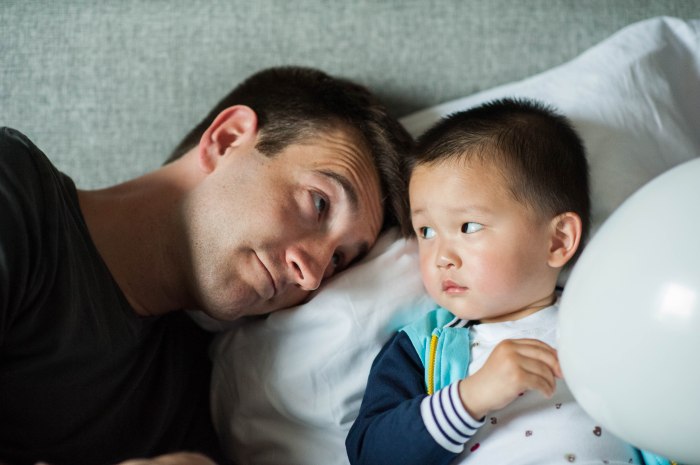 One thought on “Gotcha Day: Becoming a Family of Five! | China Adoption”